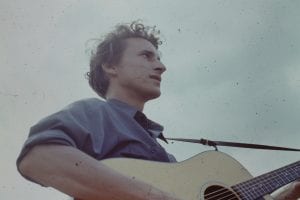 We were all that young once, weren’t we? I know I was. It seemed like it went on for quite a while. I never drove, didn’t even own a car. I took the bus and/or the rain, or hitch hiked everywhere I went. And I could cover more ground than people with wheels. I could eat five or six times a day and just burn it off. I was a kinetic machine with a guitar.

This photo was taken by Steve Wassermann, a long time friend of mine in Berkeley. I think I was 24 or 25. Steve was a student, or recently graduated, when I met him, and when this picture was taken back in 1975. He was the first person I got to know who could talk with knowledge and appreciation about Cuba. He was a real smart guy, still is. Steve moved away to New York and was there for years, but just recently relocated back to Berkeley. I think they missed each other, he and the city.

People talk bad about Berkeley – they talk bad about California too, the whole state, without knowing anything about it. It’s a real big place. You want crazies, they’re there. Right wingers, celebrities, surfers, revolutionaries. They’re all there. College students and preachers, trust fund hippies and ethereal seekers. And there’s also hard working shirt sleeve people who keep it all going. Immigrants form all points south of the border. Sometimes they work for less and do more than anybody else around. Sometimes they’re smart enough to be running things. Maybe some day they will be.