I got to Seattle just in time for the last folk club to close. It was called The DMZ (Demilitarized Zone) and it was in the Fremont neighborhood. It was a wonderful little draft resister kind of a place and I played there a few times before the doors were locked for good. What now? I went into the Too High and asked the bartender if I could play a few songs and he said sure, so I stood up on the bar and did what I could for a few minutes. Then I sat down and soaked in my predicament. “Why don’t you play across the street,” said the barkeep. “That’s a rock bar,” I said, “they got bands in there.” “They take breaks don’t they?” 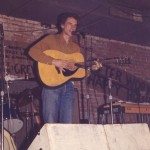 So I went across the street to The Library Tavern and took the first stroke in a strange and wonderful six year swim. There was a technique to it. First of all you had to clear it with everybody. You told the door person that you were going to play some music and showed them your guitar. Then you asked the band if you could do a few tunes during the break. It was almost always fine with them. In those days the bands had to play from 9:30 to 1:30 and that’s a lot of work. I was a welcome change. And things were a lot more open then too. There was no music industry like there is now, no star system. There were very few posers and most everybody played because they loved it. It was a great and rollicking scene and I jumped right into the middle of it.

Standing on the stage you were faced with the reality of short-term eternity: you had fifteen minutes to get their attention, hold it while you did your thing, and set them up for the hat pass. If all the parts came together you did well, if not you walked out empty. The hat pass was the barometer, that was how you counted your votes. And it was crucial how it was done. I never said a word about it after I got off the stage, but just walked around the room holding my hat in my hand and nodding at people. There’s a thin line between begging and playing for hat money, and my feeling was that if they didn’t want to pay you something before you got to them then you didn’t deserve it. And I was strict about it.

I remember one night getting pissed off at some guy who I saw do a lame set on the stage and then go around the room saying “I’m the guy who was just on stage, can you spare any change?” I mean, if you have to remind them that you were just up there then why bother? Sometimes I left with a fistful of bills. Sometimes it was barely bus fare. One time I had an ash tray dumped in my hat. Another time I got a TV set.

I learned all the bus routes and how you had to put things together to make your connections. Downtown there was a stop on third Avenue where you had to get off right away and run across the street before the bus cut in front of you as it turned right on to Pine Street. Otherwise, by the time it passed the light would’ve changed and you would miss your next connection up to Capital Hill. You learned these tricks by doing them. One time as I was running I heard footsteps behind me and I turned around once I’d crossed over to see another fellow coming behind me with a big grin on his face. “I thought I was the only one who knew about that,” I said. We both laughed. They were handing out jay walking tickets big time in those days and you had to be careful.

One night about 2:30 in the morning I was walking through Bell Town on the way to where I was living on the north foot of Queen Anne Hill. It was dead quiet. You could’ve laid down in the middle of the street and taken a nap. There was a red traffic light but I crossed anyway. Half way across I heard a metallic voice say “go back and wait for the light to change.” I knew what it was so I turned around and waited. The light went green and I crossed over and the same voice said “Thank you.” A few steps later I saw the police car with the two cops inside, bored out of their skulls.

I went to jay walking school once. Hitch hiking school too. They gave you a choice of paying your fine or going to court in the evening where a judge took roll and tried to educate you about the dangers of your behavior. The hitch hiking crowd was so unruly that it took all the time they had just to take roll. The jaywalkers were more civilized. After the roll the judge apologized for not having the jay walking movie that they were going to use, so he said they would show us a drunken driving movie instead. We didn’t have to stay for it, he said, but he would rather that we did. So we left.

After a while I got to doing some of the cocktail bars in addition to the rock clubs. I could hit these at happy hour, from five to seven, and get an early start on things. Most of the ones I played didn’t have any music or maybe just a jukebox. A lot of them I only played once. I would set my hat down on a table, get everybody’s attention and start playing. Usually people started drifting right away but there were a few good ones. Like The Bazaar Room and Jean’s Home Plate. I tried every place once, even the black tie hotels. I played a jazz club, telling them I was a “jazz mouthist.” 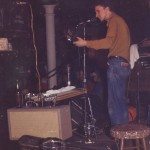 So the way it worked, I did the campus in the day, or the street if school was out. Then the cocktail bars from 5 to 7. Then I hit the rock clubs. First was the Fresh Air, where I play before the band started from 8:30 to about9:15. Then down the street for the first break in the Medicine Show, the great ancestor of all things strange and wonderful. Then down Pike Street at just the right speed to hit all the lights green and make the bus to Fremont for the second break. Then run up the hill for the bus to the third break in Greenwood at The Walrus. For a while there was another place there whose breaks were staggered so that you could do them both in the same half hour. Then take the last bus out and somehow get over to the west side of Queen Anne in time to play after the band finished at The Cosmos. Then walk home, slowly, letting the night settle in my head and maybe writing a few lines.

Seattle was the wild west back then. A misty and undiscovered country where strange characters roamed the wet nighttimes and nobody had to tell you when to laugh. It’s gone now except for the vague odd mutterings of ghosts along the waterfront. And those of us who remember will not be fooled by shiny brochures and new stadiums. The richest man in the universe may live across the water but we know what came before. And the world will know, as the world has seen, that Seattle can still live up to itself.