If you go to Seattle your first impressions may be — lots of construction, plenty of rain, and street music everywhere. It wasn’t always like that. Well, the rain and construction maybe but not the street music. That was illegal for a long time — up until 1974 in fact. And I had something to do with that. Here’s the story.

The first time I discovered the joys of street performing — and improvisation — was way back in 1968 when I was sitting around outside with a guitar buddy and I suddenly felt the claustrophobia of having to do a song that was already written. A song that had nothing to do with sitting in the town square of little Saratoga, CA. So I just started playing chords and rhyming about the two of us, the downtown, and whatever else popped into my head. It was surprising to me and very liberating. No expectations, no stylistic confines, nobody to hire and fire me. But that was it for a while — until I got to Greenwich Village and I set myself outside the Kettle Of Fish on a milk crate on a loud and crowded Saturday night in the summer of 1970. Again I began playing chords — but more aggressively this time. And, because I was seated so that me head was at waste level to the passersby, my pallet was their clothes, purses, and shoes. So as loud as I could I began to rhyme these things and I instantly gathered a crowd — at which time I stopped because I had no songs to play out there. All my songs were introverted and small. But a door had opened that would never close.

The next year — 1971 — found me in Seattle playing the only existing folk club, called The DMZ, which soon closed leaving me despondent. I didn’t know that I’d been given the best opportunity of all — when the one folk club closed the whole rest of the city opened up. All I had to do was learn how to do it. I began by playing in between sets of rock n roll bands in the bars. 15 minutes on an acoustic guitar after 45 minutes of a 5 piece band takes a bit of technique. But I got it. And that’s when somebody said “You should play on the campus they’d love you.” So I did. By then I’d written a few songs that were extroverted enough to cut through the rock bar din and they worked also outdoors. And I already knew how to gather a crowd from my experience in the Village. I played hour-long sets — just long enough for a class period so that people wouldn’t start drifting off in the middle of a song. After the campus I would go up a street called “The Ave” and improvise for a couple of hours.

But something always attracted me to downtown — it was gritty and working class –- so I went there and began doing afternoon sessions at the bottom of Pike Street just before it hit First Avenue. Across First Avenue was the Pike Place Market where street music was legal but I preferred being farther out. And the legality thing hadn’t dawned to me yet. Until one afternoon when a motorcycle cop pulled over and said “Have you got a permit?” “No,” I said. “Then next time I see you I’ll give you a ticket.” “I’ll go get one.” “You can’t ‘cause you’re not blind!” And he rode off. 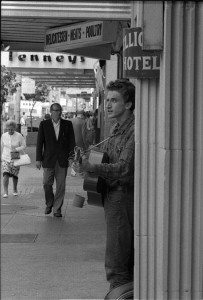 So I packed up and ran off to City Hall where I found out that sure enough it was illegal without a permit and those were only available for “blind and disabled people.” Hmmm.. I sat on it for an afternoon and then thought “let’s see what happens” and I went into the mayor’s office. You could do that then — walk right in. I told the friendly secretary what was on my mind and she said “You should go talk to Randy Revelle He’s City Council, Public Safety Committee.” So I did. If he was public safety maybe I was public danger. Randy was very supportive — “I bet we can change this,” he said. He liked the idea. In the meantime he gave a me special permit to play in certain city parks including the waterfront and the Woodland Park Zoo. I figured the waterfront would be too hectic and I would never actually play at the zoo — but he was reaching out to help me so I figured I would reach back to accommodate. It’s like if someone offers you a cup of coffee with cream and you don’t usually take it that way — you drink it anyway because it’s the right thing to do. Right?

We shook hands and went to work. Randy was my advocate, I guess you could say. But I also needed media support so I went back to the campus where I’d made friends at the University Daily, the student newspaper. The assistant editor was a personal friend and was more than eager to jump in with editorials and essays. I also went to Seattle PI (Post Intelligencer) and started asking around. The idea of publishing a newspaper after you were intelligent always made me laugh — you know, “post intelligence” — but I went ahead. And I found a friendly and smart journalist named Rick Anderson who thought it was a good story and interviewed me on the spot. I also hit the radio stations and TV. So that part was covered.

Meanwhile Randy Revelle had arranged for a public hearing at the City Council Chambers. It was a Tuesday, it was April of 1974. Middle of the afternoon. Excellent! I’d never played at City Council before. Didn’t Shakespeare say that the world is a stage? I don’t know what he meant back then but to me it made perfect sense. So I made a poster — 8 ½ by 11 — color paper, big letters: “Jim Page – Live at the City Council!” And I put them all over where I usually played. In the rock bars and on the campus — any excuse to get out of class. I went around on the night before and put some up where I knew they’d be taken down the next day — but not before the morning people saw them. Then I packed up my guitar and went to CityHall.

It was a packed house — the Seattle Times and the PI were both there. Also the UW Daily and a lot of musicians. 1974 was the year of Watergate so I wrote a special song for the occasion called “Now’s The Time For Talking” — dealing the secrets and the necessity of open public gatherings and discourse and how the great historical street singer was the carrier of that vocal tradition. AND the canary in coal mine. Close the public commons to the musical news of the day and you open the door to corruption. It wasn’t a very good song but it served it’s purpose.

I don’t know how many people testified but they were from all walks of life -– professional players in the bands whose breaks I’d played, professors whose students I had corrupted, anonymous working women and men who watched me do my thing. Even a street urchin who said he’d watched me while he was sick outside — said it was like going to school — and then said, “If I was a doctor like Che Guevara I would’ve arrested myself and taken me to the hospital.” I’ll never forget that.

The support was nearly unanimous. Almost everybody thought that old anti expression law should be kicked into history’s dustbin. I say “nearly” and “almost” because there was one entity that had a strident objection. Can you guess who it was? Yep, you got it — it was the Musicians Union. Local 67. And the reason that they gave was that legal street performing would “take the money out of the pockets of symphony players.” I’m not making that up. I still can’t wrap my head around that image but hey — levity in times of change is always welcome.

The resulting council vote was unanimous in favor of overturning the law. Street performing was now legal in Seattle! Yes! I probably played out at the zoo one more time just to say goodbye — I know I went out to the campus and did an improv roundup of events. Life went on, the music got better, and people began to venture out of the Market and into the wider spaces of cosmopolitan Seattle. A new day had dawned.

Just as an addendum, myself and several other outdoor performers founded a guild at the Pike Place Market in 2000 and the first thing we did was to start an annual busker festival. “Busker” of course is what the hip people call street performers. I always called it street singing and still think of it that way. The second thing we did was to approach a friendly city council member named Nick Licata regarding the idea of creating “Buskers Week.” It was easy, Nick said, the council loves proclamations. So with the stroke of a pen it was done. 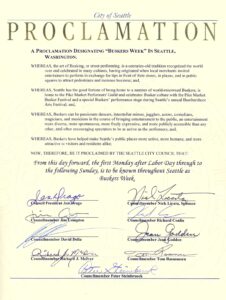 2014 was the 40th anniversary of those early City Council events and so we went all out with multiple stages at the Market and in different places around town. In the Central Library, lower Pike Street, on the waterfront. Not the zoo, oh well. In observance Nick Licata arranged for me to sing one song at a council meeting and to present both Randy Revelle — who died four years later — and myself with proclamations. It was good to see Randy again. Such a fine and truly civic minded human being.

So if you come to Seattle and you marvel at the life of the outdoor arts think of Randy Revelle, the UW Daily, Rick Anderson, and all the people who spoke their mind that day. And as you toss a coin into a guitar case or a hat think of it as the dues you pay to keep it that way.